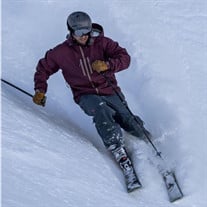 Christopher J. Nicholson December 30, 1983- January 18, 2020 Christopher was born in Norfolk, VA on 12/30/1983. He is survived by his parents, Dr. Bruce D. and Karen L. Nicholson of Schnecksville, PA, and his sister and brother-in-law Lauren A. and Paul Nonni of Huntingdon Valley, PA. Chris, as a young child loved being outdoors, playing baseball, basketball, and soccer. He was also an age group swimmer who competed year-round. At the age of 7, he learned to ski at a small ski hill near Harrisburg, PA and continued to ski locally at Blue Mt. in Palmerton, PA. When Chris was 12 his parents brought him and his sister Lauren, on a family ski vacation to Heavenly after a week of lessons, and a few run into Mott Canyon, Chris had found his passion and fell in love with the beauty of the Sierras. He also loved to fish and spend time at the family cabin in the Adirondacks, hiking and exploring with his cousins. Chris loved both the Philadelphia Eagles and Flyers and was a huge fan of UVA basketball. He never missed a chance to make you laugh and would do almost anything on a dare. He had a truly adventurous spirit. Chris lived in several states as a young child including Virginia, South Dakota, and Utah, before his family set down roots in Pennsylvania. He attended Northwestern Lehigh High School, in New Pripoli, PA where he was a member of the JV and Varsity soccer teams. He graduated in 2002 with honors. He attended James Madison University in Harrisonburg, VA for 4 years and graduated cum laude with a B.S. degree in Economics, and minors in Social Anthropology and Geography. He returned home to the Lehigh Valley area and worked at Indicon, Inc. in finance for 4 years. During that time, he developed an interest in wine and became certified as a Sommelier. In 2010 the Sierras called to him, and he decided to leave his job in PA, move to Lake Tahoe and pursue his passion. Chris was drawn to the Sierra Nevada because of his passion for the outdoors and wanting to spend his winters skiing. He started ski patrolling at Heavenly Mt. Resort in 2010. He quickly excelled at his new career as his passion for the mountains, skiing, problem solving and helping people all came together. Over the course of his ski patrol career, Chris contributed to many Ski Patrol programs at Heavenly including the accident investigation team, snow safety program, rope rescue program and as a mentor to the less experienced team members. Chris has recently been promoted to a snow safety specialist and truly loved observing how snow and weather interacted with the mountains. During the summers, Chris's love for the water led him to become a certified licensed boat Captain. He worked for both the TRPA on water programs and Birkholm's Water Ski School over the years. When not on the lake Chris could be found lounging on the beach, pedaling through town or on the beach volleyball court every Wednesday night serving his vicious "Knuckle Serve." Chris was a certified scuba diver and enjoyed many vacations in the BVIs bareboat sailing with family and friends from PA. He has a love for music, spanning across all genres and attended numerous concerts and shows. He never missed a chance to dance. Chris made a once a year trip to the Black Rock Desert, which he called his second home. On January 18, 2020, Chris passed away in a ski related accident which occurred while he was working on the mountain. Chris has made South Lake Tahoe his home and was a dear friend to many and loved the mountain community. A Chris Nicholson Memorial Fund has been established to assist, further educate and mentor fellow patrollers who embrace the mountain lifestyle Chris loved so much. Donations can be made in Chris's name and sent to: Heavenly Ski Patrol Fund PO Box 13785 South Lake Tahoe, CA 96151-3785 Celebration of Life March 3, 2020 Heavenly Mountain Resort 3860 Saddle Road South Lake Tahoe, CA 96150 Torchlight Parade Viewing-6:00PM Base of World Cup Chairlift Celebration-6:45PM California Main Lodge Come Share in Hugs, Memories, and Laughter.

Christopher J. Nicholson December 30, 1983- January 18, 2020 Christopher was born in Norfolk, VA on 12/30/1983. He is survived by his parents, Dr. Bruce D. and Karen L. Nicholson of Schnecksville, PA, and his sister and brother-in-law Lauren... View Obituary & Service Information

The family of Christopher John Nicholson created this Life Tributes page to make it easy to share your memories.