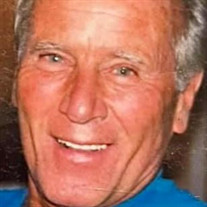 Dan Jenkins made his transition to glory on Friday, September 10th, 2021, in Carson City, NV. Dan Jenkins was born May 2, 1933, and grew up in Reno, NV. He was a loving husband, father, and friend. He was respected and loved by many. Dan graduated from Reno High School and later attended Menlo College in Atherton, CA, and the University of Nevada, Reno. He later joined the US Marines based at Camp Pendleton, where he served two years, during which he was promoted to staff sergeant. He also served as a driver for an officer and was proud to have made the Marines football team. Dan and his family moved from Reno to Gardnerville, NV in 1965. He worked in Carson Valley for over 56 years and loved what he did, still working at 88 years old. He was greatly admired by many and seemed to know nearly everyone in the Valley. Dan began working for Douglas County in the Building/Planning Department, as a building inspector, and was later promoted to head of the department. He eventually started his own successful environmental land planning business and became one of the few people in the area specializing in septic design. Even in his later years, he embraced new septic technology and helped introduce it to the Carson Valley. He truly loved what he did and was concerned about his ongoing jobs up until the day he passed. Dan had many interests and enjoyed reading, writing, country music, road and mountain biking, running, hiking, working out and photography. One of his biggest accomplishments was completing the Death Ride in Markleeville, CA, four times in his 50s and 60s. He loved his horses, and deeply enjoyed spending time with family, and of course, his dogs. Dan was a great storyteller, and his humor could entertain for hours. He was a generous, caring, honest, and thoughtful man. He will be missed by all that knew him. Dan is survived by his wife, Lori Jenkins, daughter, Kay (Jenkins) and husband Rick Smith of Green Valley, AZ, daughter, Krista Jenkins of Gardnerville, NV, daughter, Gina (Jenkins) and husband Alan Telford of Truckee, CA, stepdaughter, Krista Haggott of Bowman, ND stepdaughter, Jennifer Roberts of Minden, NV, and grandchildren, Megan, Madison, Jack, Briana, Caitlin, and Elliott. Dan had lasting relationships with Linda Bratton and her daughters Shannon Harris, Jamie Bratton, and Jim Meyers who he held close to his heart and considered family. Dan was preceded in death by his parents, Robert and Evelyn (Sally) Jenkins and his granddaughter, Marie McCreary. A Celebration of Life will be held at 11am on Saturday, September 18th, at Eastside Memorial Park Cemetery – 1600 Buckeye Rd., Minden, NV 89423. Feel Free to wear shorts and a hat in honor of his signature look!

Dan Jenkins made his transition to glory on Friday, September 10th, 2021, in Carson City, NV. Dan Jenkins was born May 2, 1933, and grew up in Reno, NV. He was a loving husband, father, and friend. He was respected and loved by many. Dan... View Obituary & Service Information

The family of Daniel " DAN " Jenkins created this Life Tributes page to make it easy to share your memories.

Dan Jenkins made his transition to glory on Friday, September...