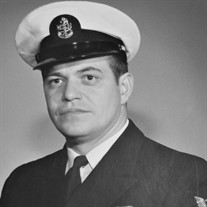 John J. Delaney (Jack), 87, of Minden, NV passed away peacefully on December 13. Jack was a native of Watervliet, NY. A 20-year Navy veteran, Jack retired as Chief Petty Officer in the Hospital Medical Corps. He served one tour in Korea and three tours Vietnam. He served on the USNS Geiger, USS Lexington, USS Oriskany, USS Barry and his favorite USS Missouri. The USS Missouri was a real home for Jack and after attending his first Honor Flight trip in Washington, D.C. in 2013 with his late wife Marjorie, he truly felt the mark his service had left on this world. Jack was able to attend the 80th Pearl Harbor Anniversary in Hawaii just last week. After his retirement from the Navy, Jack worked at Cohoes Hospital and Leonard Hospital in New York. He was highly involved in Honor Flight Nevada and the USS Missouri Association and will be missed by his friends in those organizations. Jack was truly a “jack of all trades” and would often be found outside where he spent much of his free time landscaping, or in the garage working on any number of projects, including soldering charms onto his granddaughter’s charm bracelets. One of the phrases Jack often said to his family was, “If brains were dynamite, I wouldn’t have enough to blow my nose” which could not be farther from the truth! An avid reader, some of Jack’s favorites genres were history, legal thrillers, and biographies. Jack’s granddaughters fondly remember him imparting the wisdom that you cannot eat a cookie alone - they have to be eaten in pairs. His recipes, including macaroni & cheese and tomato soup cake, live on in the kitchens of his family members. Jack’s family played the most important part in his life. He is predeceased by his wife of 55 years, Marjorie (Dauntler) who passed on December 13, 2013. He is survived by his son Tim Delaney and Robyn (Lashbrook), daughter Marion (Delaney) and Jack Driscoll, grandchildren Alyssa (Driscoll) and Matt Jochym, Ashley (Driscoll) and Stephen DeJute, Chris and Christa Bormann. Also, great-grandchildren Noah and Emma Jochym, Madeleine, Sophia and Patrick DeJute, and Zaylee Bormann. Full Honors and Internment will be at Northern Nevada Veterans Memorial Cemetery in Fernley at a date to be determined. In lieu of flowers, donations to Honor Flight Nevada (honorflightnv.org) are requested.

John J. Delaney (Jack), 87, of Minden, NV passed away peacefully on December 13. Jack was a native of Watervliet, NY. A 20-year Navy veteran, Jack retired as Chief Petty Officer in the Hospital Medical Corps. He served one tour in Korea and... View Obituary & Service Information

The family of John (Jack) J Delaney created this Life Tributes page to make it easy to share your memories.