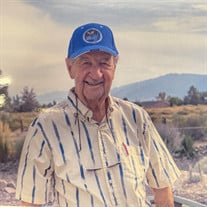 JOHN (JACK) WILLIAM HILL August 2, 1922 - December 26, 2020 Jack lost his six-year battle with Leukemia on December 26, 2020. A WWII Veteran of the US Air Force, he flew night missions in a Douglas A-20 Light Bomber in Italy. He piloted his crew, who were sent out to stop the Germans from advancing on the Po River and the Brenner Pass in Northern Italy. He always gave his crew credit for successful missions in the dark, saying he was “just the driver.” A member of the 47th Bombardment Group (L) 85th Squadron in the Twelfth Air Force, he was awarded the Distinguished Unit Citation, The European African Middle Eastern Service Medal, and the Air Medal in 1945 for his combat service. After the war, he continued in the Air Force Reserves out of Travis AFB in CA and retired as a Major in 1982. In 1952, he joined the Contra Costa Consolidated Fire Department in Walnut Creek, CA as a firefighter and retired as a Battalion Chief. Jack was instrumental in assisting with the design of a new alarm system for the department prior to retiring. He piloted the department’s aircraft for arial fire management during his last years at Station 2. He and his wife discovered the Carson Valley in Nevada in 1973 while touring the area on their motorcycle. They were attracted to the beauty of the valley, and Jack had his eye on the airport situated 2 miles from the lot they purchased. They moved to Minden 46 years ago. Jack flew for over 74 years. For 41 of those years, he flew out of the Minden/ Tahoe Airport until 2015. With his instructor’s rating, he also introduced many of his friends to the thrill of flying. If you met Jack, you’d feel like you just met your new best friend. He humbly shared his knowledge of his favorite aircraft, HAM radios, motorcycles, and old cars. You’d soon know that his first love was flying, and he was a proud American. Jack considered himself very lucky. He was not a man to complain except when he lost his privilege to drive his car. Hope, Happiness, and the Will to Live were never absent, even in his last days. During his years living in this valley, he could be found at the Carson Valley Country Club meeting up with his good friends on Sunday nights. To Jack, his friends were special; dinner was secondary. He enjoyed a good Picon Punch on occasion at the JT Basque Bar, where everyone knew his name and enjoyed hearing the stories of his long life. Jack was an active member of the Tahoe Amateur Radio Association (TARA) Lake Tahoe, CA. Also, he was a member of the 47th Bombardment Group Association, Colorado Springs, CO, and Retired Officer’s Association, Alexandria, VA. He was predeceased by his mother Sophie Lassiat Hill, father, Thomas Cochran Hill; his wife Marjorie Saatzer Hill of 63 years; and is survived by his daughter, Judie. A memorial is being planned at Eastside Memorial Park in Minden, NV on Sunday January 17th at 11am. In lieu of flowers, please consider making a donation to the charity of your choice.

JOHN (JACK) WILLIAM HILL August 2, 1922 - December 26, 2020 Jack lost his six-year battle with Leukemia on December 26, 2020. A WWII Veteran of the US Air Force, he flew night missions in a Douglas A-20 Light Bomber in Italy. He piloted his... View Obituary & Service Information

The family of John (Jack) William Hill created this Life Tributes page to make it easy to share your memories.