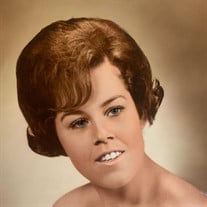 Linda Coleen Guthrie August 15, 1947 – September 3. 2021 Linda Coleen Guthrie entered the gates of Heaven on September 3, 2021 in Reno, Nevada following a brief illness. Linda was born on August 15, 1947 in Richmond, California to Murial and James “Tim” McCoy. Soon thereafter, the family relocated to Hawthorne, Nevada where Linda grew up and attended Mineral County High School. After graduation, Linda worked at the El Capitan Casino and then for the Naval Ammunition Depot as an Explosives Technician. Linda met her future husband and eternal life partner, William “Bill” Francis Guthrie, a United States Marine stationed in Hawthorne, Nevada. Linda and Bill were married in Hawthorne on November 22, 1967 and the following year, welcomed their first child Timothy L. Guthrie. Two years later, they welcomed their daughter, Sandra D. Guthrie. Linda, Bill and the kids moved to Las Vegas, Nevada in 1971, where they chose to begin their new lives together. While Bill began his career in law enforcement, Linda chose to be a stay-at-home mother caring for her children. After a few years, she began her career in the grocery business. She worked for Smith’s Food King for many years as a Liquor Manager before beginning her next adventure with the State of Nevada, Department of Motor Vehicles. After nearly 23 years in Las Vegas, Linda and Bill relocated to Gardnerville, Nevada. Linda continued to work for the Department of Motor Vehicles as the Minden Office Supervisor until her retirement in 2006. She later started her own business called “The Chain Gang” making customized key chains which she dearly loved doing for many years. Linda who was affectionately known as “Hurricane Linda” to her husband and friends, brought joy, love and laughter to all that knew her. Besides being a loving, devoted wife to her husband of nearly 54 years and a loving, nurturing, supportive mother to Tim, Sandi and their spouses; her greatest joy was being a grandmother to Julius (J), Taylor (Sissy), Jacob, Jordan (J.D.), Brian and Zachary. She loved all of the holidays and the family gatherings that accompanied them. Making sugar cookies at Easter, Halloween and Christmas with the grandkids was an especially enjoyable time for Linda. She also found such joy and pride in attending her grandkid’s school plays, concerts, sporting events, and graduations and was always there to take a “Mom, can you please watch the kids” call and her grandbabies were all blessed to have her sing the “Dah dah dah” song, sure to sooth the cranky baby. If you talked to anyone who knew her, they would say they felt as if they were a part of our family as she would not hesitate to brag about each and every one of us and what we were doing in our lives. She never missed a trip to Disneyland and especially enjoyed cooking, camping, traveling, and making her house a home. Linda is survived by her loving husband Bill, her children Tim Guthrie, Daughter in Law Susan Guthrie, Daughter Sandra Bailey, Son in Law Kevin Bailey, and grandchildren Julius (J), Taylor (Sissy), Jacob, Jordan (J.D.), Brian and Zachary. A celebration of life will be held on October 2, 2021 at 1:00pm at Eastside Memorial located at 1600 Buckeye Rd, Gardnerville Nevada 89410. The family asks that anyone attending to please wear any color of blue in remembrance of her beautiful blue eyes. Linda’s giving nature and nurturing spirit will be forever missed by her friends and family. We have temporarily said goodbye to our beautiful wife, mother, grandmother and friend. Until we meet again beautiful angel!

The family of Linda C Guthrie created this Life Tributes page to make it easy to share your memories.