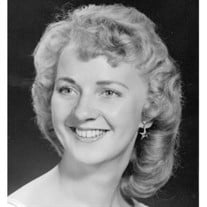 May 12, 1934 – Aug 8, 2019 Marion Fay Ellison, a long-time resident of Minden, passed away on August 8, 2019. Marion started her days on May 12, 1934 as the daughter of Thomas Virgil Erastus Winterbottom and Fay Jensen Winterbottom. She was born in Fish Haven, Bear Lake County, Idaho and became the oldest of seven siblings over the years that followed. She loved to write, and became the editor of her high school newspaper. This only increased her desire to pursue a career in writing and she majored in journalism in college. Over the ensuing decades her poetry and articles appeared in many newspapers and magazines. In 1984 she compiled a book bringing together all of the early Utah and Nevada Territorial records, opening the door for future Nevada historians to recreate Nevada’s early history. She was frequently contacted by historians to research and review their works. Her writing, however, became of secondary importance to her role as a mother following her 1958 marriage to Robert Ellison. Their family of three boys and two girls started her on the path of service for her own children and their friends. Marion was known for her service to others and she served for almost a decade with her church’s summer girls camp. She volunteered for many years in Scouting, serving in many capacities including Den Mother, Blazer Scout Leader and was a founding member of the initial charter of Cub Pack 140. Through those years she received the District Award of Merit and the Silver Beaver, the highest awards Districts and Area Councils award to volunteers. Marion’s talents were many and she became an expert tailor and seamstress making wedding dresses, bridesmaid dresses, prom dresses, children’s clothing, draperies, and many other items. As a baker and caterer she made over a hundred wedding, anniversary and birthday cakes for Carson Valley families. She served as a registrar of voters for over thirty years and was in charge of the Johnson Lane precinct voting poll for over sixteen years. Her quiet service in her community was also seen during the ten years she spent placing foreign exchange students in homes throughout Northern Nevada, including her own home. She was an essential part of the growth of The Church of Jesus Christ of Latter-day Saints in the Carson Valley for over 50 years. She faithfully served in teaching hundreds of children and youth including several years as an early morning seminary teacher for high school students. She actively sought opportunities to welcome and support new members of the church and community. She is survived by her husband Robert, her sons Robbie (Jill),Todd, Derek (Heidi) and daughters Tahna (Scott) and Sharla (Scott), Jesse (Serapio) as well as 22 grandchildren and 24 great-grandchildren. She also leaves behind her brothers Howard and Richard, as well as her sister Samantha Claire Jensen. She was preceded in death by her parents and three of her brothers. Marion will be remembered with great love and gratitude by her family and friends. Services will be held at 11:00 a.m., Friday, August 16th, 2019 at the Spruce Street Chapel of The Church of Jesus Christ of Latter-day Saints located at 1095 Spruce Street in Minden, Nevada.

The family of Marion Fay Ellison created this Life Tributes page to make it easy to share your memories.