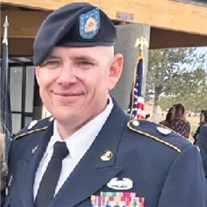 Michael Scott McElfish November 8, 1977 ~ August 23, 2020 Michael McElfish passed away with family by his side on August 23, 2020. Michael was born in Sun Valley, California to James (Mike) and Susan McElfish at Serra Memorial Hospital. In January 1978 Michael’s parents moved their family to Carson City, Nevada. Michael graduated Carson High School class of 1996. Michael joined the Nevada National Guard in 2007, he attended basic training at Ft. Benning, Georgia, and served one tour in Afghanistan with 422nd Signal Battalion. Michael learned his love of machining and mechanical trade from his father, and expanded his knowledge as a Wheeled Vehicle Mechanic (91B) with the Nevada National Guard. Michael also enjoyed Hot Rods, dirt bikes, and racing outlaw karts with his father and two brothers, and passed the love of dirt bikes on to his two sons Riley and Gregory. Michael and Della shared the love of cooking together on Sunday mornings. Michael was a man of love, courage, and family; he is survived by his wife Jessica, and son Gregory, ex-wife Melissa West and children Riley McElfish, Della McElfish, parents James (Mike) and Susan McElfish, his brothers Ryan McElfish (Kellie Karasek) nephew Carter, Matthew McElfish, his sister Lindsey McElfish as well as several Aunts, Uncles, Cousins and large extended family. Michael is preceded in death by his cousins Joshua Rodgers and David Candia. A memorial service will be held at 11:00 AM on September 5, 2020 at Eastside Memorial Park in Minden NV. In lieu of flowers donations should be made to Disabled American Veterans (DAV.org).

Michael Scott McElfish November 8, 1977 ~ August 23, 2020 Michael McElfish passed away with family by his side on August 23, 2020. Michael was born in Sun Valley, California to James (Mike) and Susan McElfish at Serra Memorial Hospital. In... View Obituary & Service Information

The family of Michael Scott McElfish created this Life Tributes page to make it easy to share your memories.