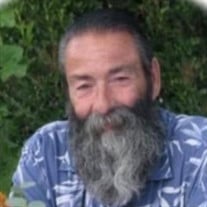 Michael (Mike) Patrick Samaniego, 70, passed away peacefully at home on June 17, 2021. Mike was born on November 21, 1950, in Santa Clara, California, to Alex Patrick Samaniego and Della Aguiar Samaniego. He graduated from Santa Clara High School in 1968. Music was an important part of his life, early on performing as a base guitarist and vocalist with “The Copper Brick Window”. After enlisting in the United States Navy, Mike served the Brown Water Navy in Viet Nam from 1970 to 1971 as part of the River Patrol Force. After returning home, he worked at Almaden Vineyards for many years, until he relocated to Northern Nevada in the early 1980’s. There, he began a career in the restaurant food industry until 2000, at which time he joined the trucking industry, until he retired in 2015. Michael enjoyed spending time with his family and friends, camping, boating and riding his Harley. He was a life time member of the Viet Nam Veterans of America and active with the Carson Area Chapter 388. Mike was preceded in death by his grandfather, Manuel Aguiar and parents, Alex and Della Samaniego. He is survived by his wife of 39 years, Becky Overton Samaniego; daughters, April Caughron (Jason) and Jessica Samaniego; son, Greg Minter (Katie); Sister, Sharon Booth and 10 grandchildren. In lieu of flowers, donations can be made in his name to the Veteran’s Guest House, 880 Locust Street, Reno, Nevada, 89502. A grave side service will be held on Thursday, August 5, at 10:00 AM at East Side Memorial Park, 1600 Buckeye Road, Minden, NV 89423.

The family of Michael Patrick Samaniego created this Life Tributes page to make it easy to share your memories.