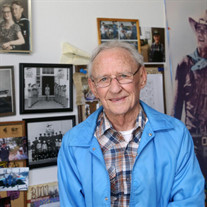 A military service is 10 a.m. Thursday for one of the last survivors of the sinking of the USS Yorktown during the Battle of Midway. Gardnerville resident Robert Ivan Daniels died Christmas Day, three weeks short of his 98th birthday. Born Jan 13, 1922, Daniels was 17 when he joined the U.S. Navy where he became an aviation electrician and was assigned to the Yorktown. Daniels was assigned to one of the ship’s 20 mm ant-aircraft guns, passing ammunition. The Yorktown fought in the Battle of the Coral Sea on May 4-8, where it was struck by a Japanese bomb that inflicted damage estimated to take three months to fix. The Yorktown’s sister ship, the Lexington had to be sunk after being hit by torpedoes. “Our ship had to be dry-docked in Pearl Harbor for repairs,” Daniels told reporter Scott Neuffer in 2012. “Then all of a sudden we’re out of the dry docks and headed out to see going out to meet the Japanese.” The Yorktown arrived at Pearl Harbor, where it was repaired to the point where the ship could go back out to sea in 48 hours. Daniels was onboard the Yorktown for the Battle of Midway June 4-7. His gun crew hit a Japanese bomber, but not before it dropped its bomb, destroying the gun and blowing Daniels and his shipmates into the ocean. He told Neuffer he didn’t have a life vest. “An inflated Mae West was floating towards me,” he said. “I grabbed it. I actually took the Mae West home after the war. I brought it up at a Yorktown reunion in Texas and I donated it to the Admiral Nimitz Museum.” Daniels served out the war in the service and then retired after 30 years as a master chief. He never received a Purple Heart, something his comrades in Veterans of Foreign Wars Post 8583 were attempting to procure for him. Daniels moved to Douglas County after he retired from the Navy. He worked as an electrician at the Sahara Tahoe for 15 years before retiring for good. A deacon at the Johnson Lane Baptist Church, he is preceded in death by his wife Ruth Katherine Lange Daniels and his daughter Nancy Kathleen. He will be remembered at Eastside Memorial Park 10 a.m. Thursday.

A military service is 10 a.m. Thursday for one of the last survivors of the sinking of the USS Yorktown during the Battle of Midway. Gardnerville resident Robert Ivan Daniels died Christmas Day, three weeks short of his 98th birthday. Born... View Obituary & Service Information

The family of Robert Ivan Daniels created this Life Tributes page to make it easy to share your memories.

A military service is 10 a.m. Thursday for one of the last survivors...