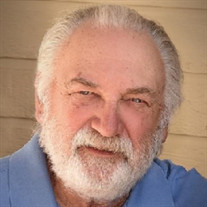 Roger A. Hala, 77, of Gardnerville, Nevada dies on Sunday November1, 2020 at Renown Regional Medical Center in Reno, Nevada. A graveside service will be held Thursday, November 12, 2020 at 2:00pm at Eastside memorial park in Minden, NV, with Father Mark Hanifan officiating, for those wishing to pay their respects.Roger was born February 6, 1943 in Toledo, Iowa the son of Anton and Lillian (Fetter) Hala. He graduated from Tama High School in 1960 and received a Bachelor of Science degree in electrical engineering from Iowas State University, Ames, Iowa in 1964. At iowa State, Roger was a member of Tau Beta Pi and Eta Kappa Mu honorary engineering societies. After graduation he began his career in engineering at Convair, San Diego, California. While in San Diego, he met and married in December of 1965 his wife Sharon (Waldron) Hala. They would have been married 55 years this December. In December of 1979, he joined Donald E. Bently, at Bently Nevada Corporation and its successor, GE Energy, and moved his family here a month later. In 2001 he partnered with his daughter to open Kids Pix Portrait Studio in Minden, Nevada. He later retired from GE in 2010. Roger was a valued employee and highly regarded engineer and holds 22 patents, most revolve around reciprocating compressors. Roger was an avid golfer and a mentor to all ages. He could be found most Sunday mornings at the Carson valley Golf Course, with men’s Club, where he had been a long-time member and their treasurer. He is survived by his wife, Sharon; daughter Katrina (Dewayne) Allmett; grandchildren Christopher Peters II, Alexa (Ryan) Sinclair, Savannah Almett, Taryn Allmett, great granddaughter Ava Sinclair, all of Gardnerville. He is also survived by three siblings, Marilyn Hala, Reston, VA; Norbert Hala, Beavercreek, OH; and Natalie Hala, San Francisco CA. He is preceded in death by his daughter Barbette and his parents. The family has set up a Go-Fund me page in lieu of flowers, we are kindly asking for donations which will be used to help fund youth golf in the Carson Valley are. Gofundme.com Roger Hala memorial fund.

Roger A. Hala, 77, of Gardnerville, Nevada dies on Sunday November1, 2020 at Renown Regional Medical Center in Reno, Nevada. A graveside service will be held Thursday, November 12, 2020 at 2:00pm at Eastside memorial park in Minden, NV, with... View Obituary & Service Information

The family of Roger A Hala created this Life Tributes page to make it easy to share your memories.

Roger A. Hala, 77, of Gardnerville, Nevada dies on Sunday November1,...