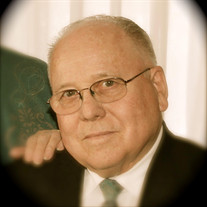 Steve Larkin Shaffer, 83, passed away peacefully at the home he built with his own hands on Wednesday, September 25, 2019. Steve is survived by JaNae, his wife of 58 years, and their five children: Ronald Larkin Shaffer (Claudia) of Springville, UT; Keith R Shaffer (Karen) of Carson City, NV; Creg V Shaffer (Julene) of Gardnerville, NV; Steven W. Shaffer (Heather) of Plain City, UT; and Laura Guillaume (Zach) of Farmington, UT. He and JaNae have 21 grandchildren and 8 great-grand-children, with another on the way. He is also survived by his sisters: Connie Parrack, Mary Drake, Ruby Shaffer and Ruth (Tom) Emang. He was preceded in death by his parents, his brother Bob, and his sister Dora Wheat. The son of Vernon Larkin Shaffer and Lucile Garn, Steve was born on September 20, 1936 in East Garland, UT and moved to Hailey, ID as a child. Gifted with athletic ability and strength disproportionate to his size (school nickname “Muscles”), after graduating from high school, Steve furthered his education and athletic pursuits at Ricks College (now BYU-Idaho). Steve served for two years in the Northern States Mission for the Church of Jesus Christ of Latter-day Saints. After returning home and joining the National Guard, he moved back to northern Utah where he met JaNae Zundel at a Christmas party. They were married on March 3,1961 and sealed for time and all eternity in the Logan, Utah Temple. In 1967, Steve and JaNae moved to South Lake Tahoe, but after a few snowy winters they decided to settle their family in the beautiful Carson Valley where they have spent the past 48 years. Steve helped to pioneer the cable television industry in South Lake Tahoe, and later turned his focus to the trade of construction as a General Contractor and custom home builder. He was respected as a master finish carpenter, with attention to detail and precision, known for sticking with a project until it was perfect. A lover of the outdoors and hunting and fishing, Steve knew every good fishing hole on the local waters, and could show you, right until the last days of his life, every deer herd around Carson Valley and the Pinenut Mountains. However, Steve’s greatest loves were his Savior Jesus Christ and the Restored Gospel, his family, and his country. He held a great reverence for each, and those that knew him would not dare to make light of any. He was an active member of the Church of Jesus Christ of Latter-day Saints, and was instrumental in the growth of the Church in the Carson Valley. He helped to build church buildings in South Tahoe and Carson Valley, served in several bishoprics, on the Stake High Council, as a Stake Missionary, and most recently enjoyed serving in the Reno, Nevada Temple. To his family, Steve was a beloved son, brother, husband, father and grandfather. He could fix or “Shaffer-rig” anything and was the definition of a "Jack of all trades." He was known for giving gifts of homemade smoked fish and jerky, and pine nuts he had gathered himself. He will be greatly missed by all who knew him. Services will be on Friday, October 4, 2019 at 11:30 a.m., with a viewing at 10:00 a.m. at the Church of Jesus Christ of Latter-day Saints, 1095 Spruce Street, Minden, NV.

Steve Larkin Shaffer, 83, passed away peacefully at the home he built with his own hands on Wednesday, September 25, 2019. Steve is survived by JaNae, his wife of 58 years, and their five children: Ronald Larkin Shaffer (Claudia) of Springville,... View Obituary & Service Information

The family of Steve L Shaffer created this Life Tributes page to make it easy to share your memories.

Steve Larkin Shaffer, 83, passed away peacefully at the home...