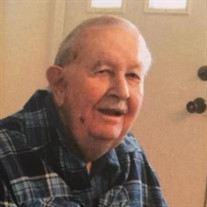 May 8, 1931 – October 7, 2020 Warren Thayer of Minden, passed away peacefully on October 7, 2020. He was born in Queens, NY and was an only child. At a young age, his family moved to Lomita, CA where he grew up. Warren was a standout on the high school and college tennis teams. He graduated from Narbonne High and went to work for the U.S. Postal Service as a mail carrier. A few years later, he providentially was hired by the Southern California Gas Co., who he worked for the remainder of his career. Warren was known for being friendly and a hard worker. After retiring, he and his wife relocated to Minden, where they have enjoyed living for the last 25 years. Seeing a need and utilizing his leadership gifts, Warren founded and coordinated the Douglas County Sheriff’s Citizen Patrol program for more than 15 years. Warren is survived by his loving wife, Beverly; by his daughter, Cindy Duhn (Thore), son, Scott Thayer (Karen); and by his four grandchildren, Joshua, Rebekah (Ben), Travis, and Zachary. Warren will be greatly missed, fondly remembered, and never forgotten by his family and friends. A memorial service will be held at Eastside Memorial Park on Friday, October 23 at 11:00am, with visitation at 10:00am. In lieu of flowers, the family requests that donations be made in memory of Warren Thayer to your favorite charity.

The family of Warren Floyd Thayer created this Life Tributes page to make it easy to share your memories.